The Cosford crest consists of an acorn superimposed on an oak tree.

"An apt reminder that Great Oaks from little acorns grow".

It also reminds us that RAF Cosford is situated close
to the "Royal Oak" at nearby Boscobel.

The 306th entry and No. 2 School of Technical Training

The School also gave advanced training to adult airmen and women
in the Electronic and communication trades. Including Airmen
and Officers from foreign Air Forces.

In addition to the Technical and Physical training, Apprentices were encouraged
to participate in all aspects of hobbies and sporting activity. Cosford had a
superb indoor Athletics arena, that was used by athletes from all over the world.

As you will see from the Photo Gallery, the RAF had a cottage and training area
in mid Wales at "Ty Canol, Llanymawddwy. This was the base camp for hiking
and rock climbing activities, as well as canoeing on lake Bala.

After training we were all posted to stations around the world,
to commence " Normal" Service life. 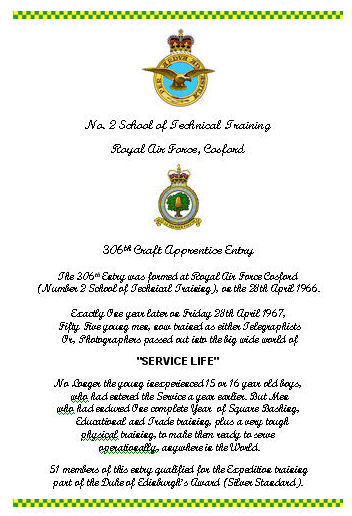 The Following text is taken from the Booklet issued at our "Passing Out" review:

No. 306 ENTRY OF CRAFT APPRENTICES

The Reviewing Officer was accompanied by

PROGRAMME OF THE REVIEW

1400 Hours
The Parade advanced on to the parade ground

1415 Hours
Fanfare of trumpets as the Reviewing Officer arrived for
the inspection, ceremonial parade and march past

1515 Hours
A Fanfare of Trumpets as the reviewing officer arrived at the
Station Concert Hall for:

b. Presentation of prizes

1545 Hours
The Reviewing Officer went to the Officers' Mess for tea.

At this point the 306 entry members went back to Fulton Block,
started packing our bags, said our farewell's to each other
and left Royal Air Force Cosford for the last time.

THE PASSING OUT REVIEW - Consisted of an Inspection of
No. 306 (Craft Apprentice) Entry by the Reviewing Officer,
followed by ceremonial drill and a march past.

The 306th entry was formed up as No. 1 Squadron of two flights.
Behind us was two supporting Squadrons, each of two flights,
made up of apprentices from other entries.

No Officer, non-commissioned Officer or Airman took part in the
parade, which was commanded by Flight Sergeant Apprentice
A. G. Scott of the 107th (Apprentice Technician) Entry, which
was the Senior Apprentice Entry at Cosford.

The Squadron Commander of the Passing Out Squadron
was Sergeant Apprentice R. G. Surman of the 306th Entry.